At Home with Daffodils – the History & a Giveway 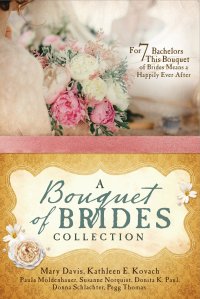 When I originally proposed At Home with Daffodils, my story in A Bouquet of Brides, I wanted the story set in 1895 in northeastern Oklahoma. When the novella was picked up by Barbour, and I began my research in earnest, I requested permission to move the historical timeline to after Oklahoma’s statehood, which happened on November 16, 1907. I made this change because I found myself getting lost in Oklahoma’s varied history. At the time of the original date part of what is now the state of Oklahoma was Indian Territory and part of it was Oklahoma territory.

To further confuse things, it was difficult to know just which part of Indian Territory had white people “squatting” on the land. There were many white settlements in Indian Territory, despite legal efforts to keep this from happening. Take this a step further by digging into the history of the Cherokee Nation, which settled in the area I wanted to write about, and it became very difficult to know how to handle history accurately.  Though my blond hair and green eyes might not show it, I have Cherokee and Choctaw ancestry. I wanted to handle those years with the respect due this heritage but soon realized that kind of research and historical undergirding was too dense for a book of novella length. I was relieved when the editor at Barbour allowed me to move my story to the years right after statehood.

Though modern conveniences like the automobile and electric lights were seen in the big city in these years (and the Titanic was being fully equipped with electric lights), this type of extravagance hadn’t made its way to the back hills of northeastern Oklahoma. Thus my story has undertones of the same kind of life many of us experienced through Pa and Laura as we watched the classic TV series, Little House on the Prairie.

In my story, my heroine’s mother is part Cherokee. It’s interesting to note that the nearest real town to my fictional setting is Tahlequah, Oklahoma. Tahlequah is the capital of the Cherokee Nation. The Cherokee Supreme Court Building, located in downtown Tahlequah and constructed in 1844, is the oldest public building in Oklahoma.

It was fun to research how my heroine, Dilly, dressed, fixed her hair, and managed daily life. Though this is the Edwardian era of Titanic fame, Dilly was far removed from all this fuss.

Dilly’s work in the general store and her life in this tiny community made a simple long black skirt, white shirtwaist, and sturdy boots more sensible. 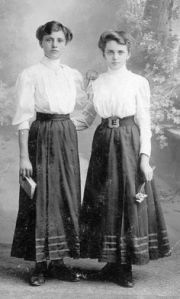 You can learn more about the history in northeastern Oklahoma by reading At Home with Daffodils.

I hope you enjoy A Bouquet of Brides, where you meet seven American women who were named for various flowers but struggle to bloom where God planted them. Watch how love helps them grow to their full potential!

To celebrate the release of A Bouquet of Brides, I’m giving away a copy of the book. Enter the drawing by signing up for my newsletter or leaving a comment on my blog during the month of January (USA readers only). Check out my website, where I have free resources and information about the Free to Flourish writing and speaking ministry.

Author, speaker, and mom of four, Paula Moldenhauer encourages others to live free to flourish. She shares this message when speaking at women’s events, and it permeates her written work. Paula has published over 300 times in non-fiction markets and has a devotional book series, Soul Scents. Her first published novella, You’re a Charmer Mr. Grinch, was a finalist in the ACFW Carol Awards, and she now has six published works of fiction. Paula and her husband, Jerry, are adjusting to a sometimes-empty nest in Colorado. They treasure time with their growing family of adult children, spouses, and spouses-to-be. Paula loves peppermint ice cream, going barefoot, and adventuring with friends. Visit her at www.paulamoldenhauer.com

4 responses to “At Home with Daffodils – the History & a Giveway”