To celebrate the release of The Pony Express Romance Collection, we’re highlighting the date the first Pony Express run began –April 3rd – and looking at other dates in history to see what happened.

Now Jesse James doesn’t play a role in my story, Her Lonely Heart, but there are outlaws and shooting, not to mention the role of young men determined to be pony express riders.

Jesse James was only fifteen when he joined a guerrilla band led by William Quantrill. Many pony express riders were younger by a year or two.

The Quantrill gang terrorized Kansas and Missouri during the Civil War. After the war, Jesse, his brother Frank, and brothers Cole, James, and Robert Younger moved to armed robbery. During the next 16 years, the gang became America’s most notorious outlaws. In 1976 the Younger brothers were captured. The James brothers escaped and didn’t rob another train until 1880, the same year a reward was posted wanting the James brothers dead or alive. Gang member Robert Ford decided the bounty was worth more than loyalty and shot Jesse James in the back. 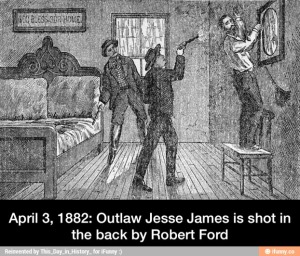 On the morning of April 3, 1882, while planning one last robbery with Bob and Charles Ford that would net him enough money to settle down permanently, Jesse reportedly stood in a chair to straighten a crooked picture on the wall.

Bob Ford shot Jesse James in the back of the head just below his right ear. His children and wife, Zerelda, ran into the room, but it was too late. Jesse James was dead at 34 years of age.

There has been speculation since he died that his death was staged and that he lived the rest of his days in peace under an assumed name. In 1947, a 102 year old man named J. Frank Dalton claimed to be Jesse James. His claim was never verified and DNA testing on the supposed grave of Jesse James has been inconclusive.

In Her Lonely Heart, there is a change of lifestyle, not by a killer, but by a bitter man set in his ways. I hope you enjoy this trip back into history, not only from this post, but from reading Pony Express Brides.

Her Lonely Heart
By Cynthia Hickey

Sadie Mathewson shaded her eyes against the harsh prairie sun. The Pony Express rider was over an hour late and his replacement had long since finished his biscuits and gravy.

“I gotta go, Mrs. Mathewson” The lanky replacement rider slapped his hat on his head. “Whatever the fella is carryin’ will have to go with the next rider through here .”

“I’m going with him.” Josiah, her twelve-year-old son, stomped from the house.

“No, son. We’ve gone over this before. The advertisement said orphans preferred.”

“Preferred, not mandatory.” His face wore a sullen look. “This trading post is boring. I want adventure.”

“I thought you enjoyed the horses and watching the wagon trains head west.”

“Not anymore. I want to be a Pony  Express rider.”

Just last week, he wanted to be a farmer. “We’ve gone over this subject until I’m numb. We’ll speak no more about it.” Sadie twitched her skirts and headed into the cool dimness of the building where her ten-year-old daughter Ruth wiped down the one counter.

“Is Josiah really going to join the Pony Express?” Ruth tossed the rag into a bucket. “I want to go. I don’t see why girls can’t ride horses.”

“Girls can ride horses, just not as Express riders.” Maybe the paper wasn’t such a good idea for her children to read. It put ridiculous notions in their heads.

“Ma? Come quick.” Josiah peered into the building just long enough to call out for her.

What now? Sometimes the duty of running the post and exchange station was more than Sadie could bear. She missed her husband. With a heavy sigh, she joined her son outside.

A rider, leading another horse, headed toward the station. As he got closer, Sadie was able to see that he was an Indian. On the second horse slouched a smaller form. “Josiah, fetch my rifle. Quick now.”

He dashed away, returning as the Indian stopped in front of Sadie. She cradled the rifle in her arms. “State your business.”

“I found rider.” He slung his leg over the saddle horn and slid to the ground. “Boy fell from horse and hit head. He yours?”

While she’d not had trouble with the neighboring Kickapoo tribe, Sadie kept her distance and moved to the other side of the boy’s horse. The leather mochila draped over the horse’s flanks clued her in to the poor boy’s identity. “He’s a Pony Express rider.”

“I take into hut.” The Indian pulled the boy into his arms and marched into the building.

Sadie hurried, but not before Ruth let out a blood-curdling scream at the sight of their visitor. “Hush, child, and fix a pallet in the corner.” She propped her rifle against the counter. “I thank you, Mister…”

“Name Fox.” He laid the boy on a worn quilt.

“Well, Mr. Fox. I’d like to repay you for your kindness.”

He straightened and fixed stern dark eyes on her before his gaze moved to the shelves. “I take that red cloth.”

“Very well.” She’d hoped to sew herself and Ruth new dresses, but hopefully someone would come along with more material to trade. A boy’s life was more important than vanity, anyway. She pulled the bolt of fabric from the shelf and handed it to Mr. Fox.

“You the nice widow people talk about.” He gave a nod and ducked back outside. Seconds later, the sound of hoofbeats signaled he’d left.

Sadie sagged against the counter to catch her breath then knelt next to the unconscious boy. Blood matted dark hair over a lump the size of a chicken egg. “Josiah!”

“Excuse me?” She narrowed her eyes.

“Much better[. I need clean water and rags. Ruth, fetch me the canteen.”

While her children scurried to do her bidding, she ran her hands over the boy’s arms and legs looking for fractures. Nothing appeared broken. God willing, he’d open his eyes soon and tell her his name.

“Here’s the water. I’ll care for the horse.” Josiah stared down at the boy. “I could take his place, Ma.”

“No.” She dipped the rag into the water and worked at washing the boy’s face and wound. “I said to say no more about riding. You’re the man of the house with your pa gone. What would I do without you?” Loneliness already assailed her from morning to night. With one of her children gone, she feared her knees would buckle from the weight of it and she’d never get up again. 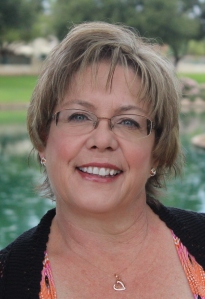 Multi-published and Amazon and ECPA Best-Selling author Cynthia Hickey had three cozy mysteries and two novellas published through Barbour Publishing. Her first mystery, Fudge-Laced Felonies, won first place in the inspirational category of the Great Expectations contest in 2007. Her third cozy, Chocolate-Covered Crime, received a four-star review from Romantic Times. All three cozies have been re-released as ebooks through the MacGregor Literary Agency, along with a new cozy series, all of which stay in the top 50 of Amazon’s ebooks for their genre. She had several historical romances release through Harlequin’s Heartsong Presents, and has sold close to a million copies of her works since 2013. She has taught a Continuing Education class at the 2015 American Christian Fiction Writers conference, several small ACFW chapters and RWA chapters. You can find her on FB, twitter, and Goodreads, and is a contributor to Cozy Mystery Magazine blog and Suspense Sisters blog. She and her husband run the small press, Forget Me Not Romances, which includes some of the CBA’s best well-known authors. She lives in Arizona with her husband, one of their seven children, two dogs, two cats, three box turtles, and two Sulcata tortoises. She has eight grandchildren who keep her busy and tell everyone they know that “Nana is a writer”.