It’s that time of year again! But the good news is:

We were exceptionally boring this year! Yeah! You won’t have to wallow through too much of this drivel to be able to say you survived until the end.  🙂 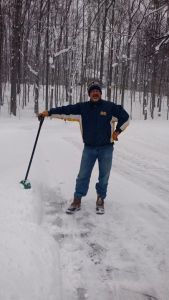 It snowed. But the good part was, it snowed at least once while Michael was home to do the cleaning out! He was still working in Traverse City at this point, driving across the state on Mondays, coming home late Friday night. Most snow storms while he was doing this occurred mid-week. So Pegg was *truly* happy whenever he was home to help clean out the snow.

Of course while at his sister’s, he also did snow removal duty. But without the John Deere.

When he wasn’t moving snow, Michael was getting back into the hobby of home-brewing beer. Like a mad scientist on a mission, he was boiling and steeping, fermenting and bottling to his heart’s content. 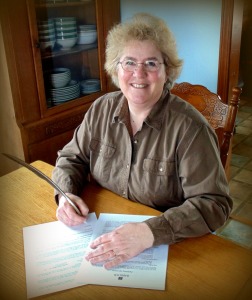 Pegg signed her first book contract with Barbour Publishing. The book will be released in April 2017. It’s a historical romance, part of collection of stories that center around the Pony Express. Her story is the final one in the collection, taking part at the very end of the Pony Express’s 18-month run. The story includes a special horse, one based on Jeff’s black thoroughbred, Jason, who passed away two years ago.

Barbour books are generally available in WalMart as well as any Christian bookstore. Pegg also has her own page on Amazon now! Anyone interested can follow her by clicking on the “follow” bar under her photo. Hopefully this won’t be a one-shot-wonder and she’ll find a home for one of several other stories either finished or in-the-works. 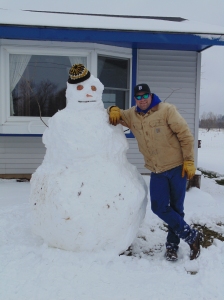 More snow. It’s a Northern Michigan thing. But the boys – Jeff and Murphy – were having a good time in it!

The BIG NEWS for April – which I don’t have a photo for – was Michael accepting a position in the Tawas office of DHHS. It’s just over an hour drive one-way, but it’s a whole lot closer than Traverse City and he’s home for a late supper every night. 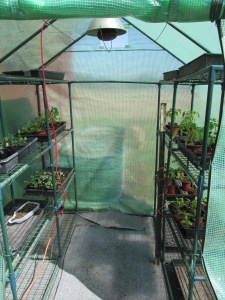 Winter hung around a long time this spring. It took forever for the snow to melt and the ground to warm, but Pegg started her garden inside in the window, and moved it to the greenhouse as soon as she could, so all was ready to plant when the garden thawed out
.

The end of April saw the arrival of a new truck, named Mosby – the Gray Ghost. Our first Dodge Ram. Yes, Pegg does hear Sam Elliott’s voice when she starts it up.

Yes. This really is Michael mowing on May 15th with snow flurries falling around him. Winter didn’t want to let go!

Mother’s Day was a trip to Mackinaw City and a visit to Fort Michilimackinac. It’s the longest continuous archaeological dig site in the United States. So much great history there! Getting to see the bridge a couple of freighters was just a bonus.  🙂 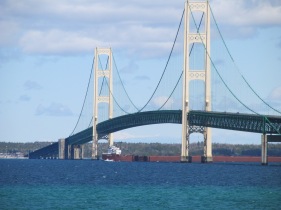 Camping! First at Ludington State Park where we had a mini-reunion with the Thomas clan. Jeff and Michael took the Badger across Lake Michigan to Wisconsin while Pegg and Murphy hung out at the camper. We took a day trip to the Soo for Father’s Day to see a few boats and enjoy a West Pier burger. Then back up to the Soo for Engineer’s Weekend which included the Boat Nerd Dinner Cruise where we met the Edwin H. Gott while Pegg was wearing her Gott shirt! That was fun.

After a long and difficult year and a half, it’s wonderful to see sheep in the pasture again.

We camped at Wilderness State Park, visited the Rendezvous at Mackinaw, and met up with Janet and Marsha for lunch at Scalawags. We went out to McGulpin Lighthouse – for some reason we’d never been there – and enjoyed walking the forest path with all its history signs to read along the way. 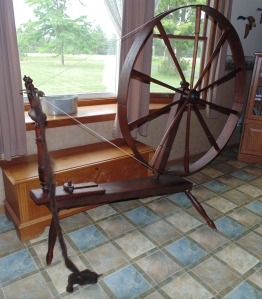 Pegg scored a sweet deal on Craig’s List and became the owner of this antique spinning wheel. Research leads us to believe that the wheel is about 200 years old. It’s consistent with wheels made in the New York, Pennsylvania, and Maryland areas. The wheel has blacksmith-forged nails holding it together. The bench is most likely hand-hewn, but the legs and uprights are turned.

The sheep were sheared on Labor Day and some of the fleece was spun on this old workhorse. While it has all it’s original parts, Pegg has ordered a new spindle. The original will be kept but no long used as it’s in a rather fragile condition. 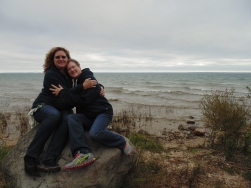 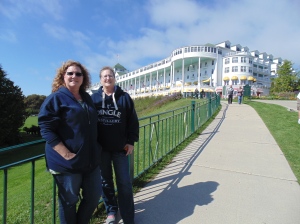 Pegg had a very special week when friends from childhood, sisters Beth and Ann, came to visit. The whole visit started from a reunion on Facebook and Beth’s desire to learn to spin. Ann got pulled into it – all the way from California! – and it was a great visit. Besides spinning and walking in the woods, they also took a trip to the Straits, crossed the Mackinac Bridge, and visited Mackinac Island. Happy memories were made that week.

More changes! Jeff took a job teaching 8th grade history in Caro, MI. Before he was even fully moved into his new apartment, he hit a deer and totaled his pickup. It’s been an interesting time for him, but he’s doing well.

Michael’s sister had a milestone birthday and celebrated it on Mackinac Island. What she didn’t expect was to have her three brothers show up for lunch! There were a few happy tears and a lot of smiles.

Pegg had surgery on her right hand in early October, correcting both carpal tunnel and trigger finger. Not fun, but good to have it done. She’s ready to type, spin, and knit for years to come.

Jeff was the hunter this year at deer camp. While this buck didn’t have many points, he had a nice 12″ spread and plenty of meat for the winter. Michael never even saw a buck to shoot at. The weather was weirdly warm, windy, and rainy. Not the best conditions for hunting.

We went to muzzle-loader camp at South Branch at the beginning of December to visit with Uncle Ron, Harvey, and Jeff. Family traditions. Priceless.

And that’s it. The highlights of our 2016. We hope your year was as full of family and friends as ours was.

We wish you all the joy of this Christmas season.

May God bless each of you.